The opening-closing state of the microcracks is a kinematic phenomenon usually modeled using a set of damage effectiveness variables, which results in different elastic responses for the same damage level. In this work, the microplane model with volumetric, deviatoric and tangential decomposition denoted V-D-T is modified. The influence of the confining pressure is taken into account in the damage variables evolution laws. For a better understanding of the mechanisms introduced into the model, the damage rosettes are presented for a strain given level. The model is confirmed through comparisons of the simulations with the experimental results of monotonic, and cyclic tensile and compressive testing with different levels of confining pressure.

Quasi-brittle materials are characterized by an asymmetric behavior in tension and compression, and a dependence of the damage evolution to the confining pressure (influence of microcracks closure). This damage effectiveness has been sometimes modeled by using two different damage variables to separate the opening and closing states [1]. Others authors had introduced a set of variables or dependent parameters, often inspired by the mechanisms at the microstructure level such as the blocked energy by closed defects [2,3], or a 4th order tensor parameter [4], but also open microcracks ratio [5], and the opening mode cracks concept [6,7], etc. We choose here a microplane formalism introduced in 1938 (Taylor [8]) and first applied to metal plasticity (Batdorf Budianski [9]). Since, they have been applied to brittle materials (concrete, ceramics, rocks, ice, etc.). For example, we can cite the work of Bazant et al. [10–14] Carol et al. [15,16] and Ramm et al. [17,18]. A detailed comparison of the main classes of those models is presented by Benelfellah et al. [19].

Microplane models consider that each direction of the solid angle chosen fixed, orients a microplane with its associated behavior. The global deformations are projected on each microplane. There are several types of formulations and we will focus on the VDT one (Volumetric, Deviatoric and Tangential). A constitutive law in the plane defines the state of stress associated from the projected deformations. The global stress is built respecting the principle of virtual work, from the stress on each microplane, through an integral over the whole solid angle. In the following simulations, the solid angle is discretized into 42 equally spaced angular sectors, ensuring the ability to describe the elastic isotropy.

2 VDT model with effectiveness of damage

Bazant and Gambarova [8] presented this approach to simulate the response of concrete submitted to compressive loading. This formulation is based on the decomposition of the strain tensor for a given direction n in a tangential part

, and a normal one which is composed of a volumetric part, ϵV and a deviatoric one ϵD (Fig. 1).

The consequences of opening/closing of microcracks on the effect of damage are introduced into the free energy of each microplane using effectiveness functions denoted αV(ϵV), αD(ϵD) and αT(ϵT), and [20].

The free energy for a given microplane is thus expressed:

(3) where kV, μD and μT are defined as the volumetric, deviatoric and tangential moduli, respectively. Applied to microplane, the second principle leads to the equation (4) and must be verified for any loading path. It results a first part giving the state variables laws at the microplane level and a second part giving the dissipation due to damage growth whose the positivity is usually guaranteed by the damage irreversibility. Three dissipative terms, dependent on the effectiveness evolution, appear (second line of Eq. (4)), and raise two questions. Should these terms be zero? If they are not null, what their physical senses? One approach is to assume non-dissipative effectiveness mechanisms (no hysteresis phenomena for example), and these terms should then always remain zero. A second approach is to introduce a dissipation, due to the effectiveness, whose the positivity and the physical interpretation must be given. 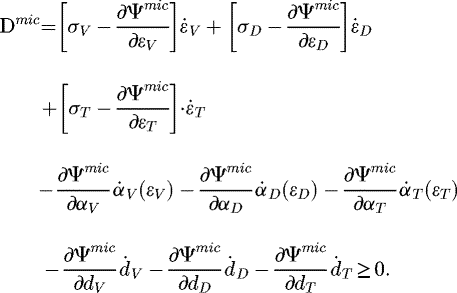 For simplicity's sake, the function of volumetric effectiveness αV(ϵV) is a Heaviside function of the observable variable ϵV which guarantees the nullity of the term

, that results in no spurious dissipation, and in a continuously differentiable free energy. We accept a partial effectiveness of 50% on the deviatoric damage when microcracks are “closed” (ϵD ≤ 0). The tangential damage is considered always effective (αT(ϵT) = 1). Thus:

It is difficult to identify microplane models because the experimental overall response results from the sum of the elementary responses on each plane, and thus is different from the “local” response of the microplane. It is therefore necessary to apply at first basic behaviors on microplane to identify afterwards the consequences once the global stress tensor is obtained.

Although a coupled damage parameters modeling would have been preferable, for pragmatic reasons, we propose a first approach with 3 independent damage variables. These damage variables are expected to evolve according to the associated thermodynamic forces Fdi, calculated from the free energy. Like the model proposed by Bazant et al., A dependency of the damage evolution at the volume change using the p parameter is added. The evolution laws are given by the following relationships:

is the initial damage of the material (i replaces indices V, D or T). a3, a4 and a5 are parameters to identify.

is the negative volumetric strain attained after the isostatic confinement of 10 MPa. Thus, the variable p is equal to 1 at the start of the compression phase of the test H10 (

) and it is higher than 1 at the beginning of the compressive test CS without confinement. Figure 2 illustrates the effect of the parameters on the damage evolution (Tab. 1).

Dependence on the pressure of the response of the material and its initial microcracking led to consider this material pre-damaged.One can see the difference of the bulk and deviatoric moduli in tension and compression because of the damage effectiveness parameters αV, αD and the consolidating effect of the pressure on the deviatoric response (Fig. 3).

4 Simulation and comparison to experimental results

) is “added” to the microplane model. The determination of the yield surface and the flow law, and the identification of the strain hardening are carried out from Le [20].

The effective stress is determined using the 4th order damage operator (I − D) −1 calculated by the microplane part of the model:

The simulations of tensile test, compressive test and compressive test with confining pressure at 5 and 10 MPa for the complete model are compared with the experimental responses in Figure 4. The simulations are interrupted just after the last experimental point. The experimental responses in tensile test and compression test are quite well reproduced. Zooming in on Figure 4 could show a slight difference in the tension and compression moduli. In a confined compressive test, a higher modulus at the origin is found and the damage evolve more slowly because of the confining pressure term in the evolution law. Figure 5 compares the simulation to the response of a confined multi cyclic test (10 MPa). The reported points along the axes for a stress of −10 MPa correspond to residual strain. In this figure the residual strains of the model are similar to the experimental ones. The balance between damage and plasticity observed during discharges is quite good.

Given the lack of experimental data for non-proportional multiaxial loading, the influence of the effectiveness and the damage anisotropy can be analyzed only by the model. The damage distribution is presented for a given value of the longitudinal strain (1%) in a plane containing the loading direction e1 (Fig. 6). Firstly, there is a strong anisotropy of the tangential damage (“□”), which is maximum in the longitudinal and transverse directions, and the deviatoric damage (“+”), which is maximum in a 45° direction relative to the loading one e1. Note that in the loading direction, the effective deviatoric damage (“O”) is half that calculated (“+”) because of the effectiveness parameter. For the same level of 1% strain, we note that the damage for compressive test with confining pressure is less developed than in compressive test without pressure, finding thus the limiting effect of the confining pressure on the damage evolution.

In this article two phenomena of effectiveness have been introduced into the VDT model respecting the thermodynamic framework. To ensure zero dissipation, these mechanisms are governed by the associated deformations. Simple Heaviside functions have been used to manage the stiffness changes on each microplane. With regard to deviatoric damage, the loss or the recovery of the modulus is partial when changing from tension to compression. No dissipative mechanism being introduced, the stiffness discontinuities occur for a null elastic strain to cancel the strain jump that could results from the variation of stiffness. For compression loads, pressure effect has been take into account in the evolution of the damage. This allows to identify the model from the triaxial test “H10” and then translate the behavior observed for compressive test. As commonly seen in some concrete models, we have integrated two damage laws to control tension-compression asymmetry. The plastic behavior has been “added” to the damageable elastic model to predict permanent deformations experimentally observed. Anisotropic effective stress formalism has permitted a decoupling of plasticity and damage. The treatment of results has been adapted and the parameters redetermined. Comparisons between calculations and experiments show a quite good agreement even if a final optimization of the parameters is necessary to further increase thereof.