An effective way to improve the combined performance of mechanical seals is to optimize their surface textures using multi-objective optimization method. For compatibility with the multi-objective optimization algorithm, the theoretical performance of a mechanical seal is often determined using the finite-difference method (FDM). However, compared with the finite-volume method (FVM) and finite-element method (FEM), FDM is weaker for dealing with the issue of discontinuous film thickness for a textured surface. In the present study, the thermo-hydrodynamic lubrication model of a mechanical seal is modified by means of an equivalent-thickness treatment, and the accuracy of the modified lubrication model is assessed by comparing its predictions for film pressure and temperature with published FVM and FEM results, showing that the equivalent-thickness lubrication model is effective for addressing the issue of discontinuous film thickness. The present work is important in that it improves the simulation accuracy of multi-objective optimization for textured mechanical seals.

In rotating machinery, leaks are prevented using mechanical seals, which have been subjected to much work to reduce friction and wear as well as leaks. In tribology, a popular method for reducing friction and wear is surface texturing [1–5], which has also received extensive attention in the context of mechanical seals. However, a surface texture with low friction or high opening force often results in a high rate of leakage [3–5], which is due to the produced opening force increasing the clearance available to the mechanical seal rings, thereby increasing the leakage [5]. Siripuram and Stephens [4] found that, for positive asperity, maximum leakage to occur at an asperity area fraction of 0.2, at which the friction coefficient is minimum; for negative asperity, the leakage tends to increase with decreasing friction coefficient.

Thermal effects are important when simulating a textured mechanical seal using a lubrication model [9–14]. Work based on a simplified energy equation under adiabatic conditions and with a constant temperature across the thickness of the film showed that the viscosity-thermal effect is important for slider and stepped bearing [13,14]. Khonsari [15,16] summarized early works on thermal effects in journal bearings and noted that most of the existing analytical solutions are based on simplified assumptions with questionable validity. A recent review by Sivakumar et al. [17] concluded that the thermal effects have a strong influence on the film thickness and pressure, and that thermal behavior is affected greatly by speed. It has also been noted that a temperature difference across the film, known as the “viscosity wedge” effect, has a significant effect on the load-carrying capacity [18,19]. The above analysis suggests that considering viscosity-thermal effect may lead to more-accurate multi-objective optimization of surface textures on mechanical seals.

Figure 2 shows a model of a textured mechanical seal. By selecting a periodic texture area, the computational domain is simplified to a rectangular one. The pressure distribution in the fluid film is obtained by solving the Reynolds equation in the form

The dimensionless Reynolds equation (3) is written as

. Here, u is the velocity, η is the dynamic viscosity of lubrication, η 0 is the viscosity at the temperature t 0, β is the viscosity-thermal coefficient, and h 0 is the minimum thickness of lubrication film. The calculation domain is a square with side length a, the inner and outer boundary pressures are p inner and p outer, and periodic boundaries are applied to account for the interaction between textures. In the cavitation regions, the pressure is set to zero according to Reynolds cavitation condition. In the region of continuous film thickness, the dimensionless Reynolds equation is discretized using a central differential in the form of

(6)from which the differencing equation of Pi,j is obtained as 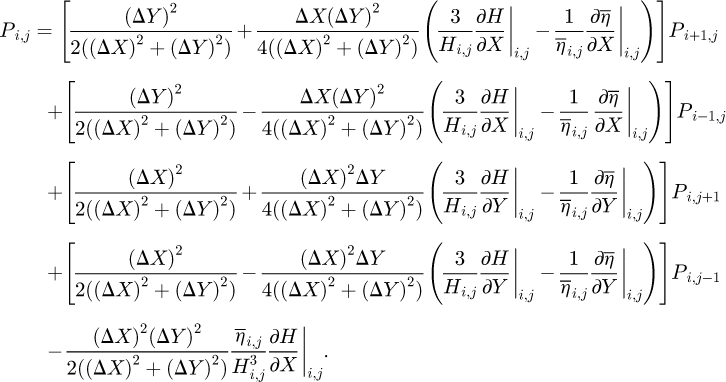 which in dimensionless form are

. Suppose that node (i, j) is a point of discontinuous film thickness. The continuity equations of fluid are

and equation (9) is discretized by an upwind and downwind differential scheme at the region of discontinuous film thickness, namely

Then, according to equations (10) and (11), the differencing equation for Pi,j is obtained as 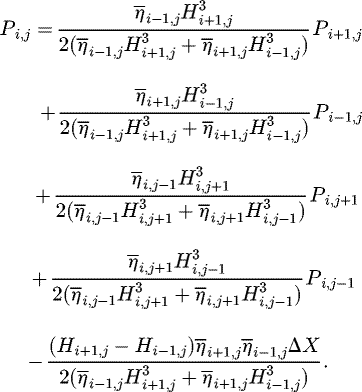 Comparing equations (7) and (12) shows that the expressions for Pi ,  j are different for the continuous and discontinuous regions. The equivalent thickness and its gradient are obtained by solving

For hydrodynamic lubrication state, it is regarded as an adiabatic process in order to simplify the procedures in this study. In fact, the viscous heat generated in the fluid is dissipated through the fluid film, into the nearby solids. The entire field of thermo-elasto-hydrodynamic lubrication deals with this phenomenon. More details can be seen in the work by Srivastava et al. [11]. The temperature, pressure and viscosity are assumed to remain constant in the film thickness direction, then a simplified energy equation is obtained in the form

(16)where qx and qy are the volume flows in the x and y directions, respectively, ρ is the fluid density, and cρ is the specific heat of lubricant. The dimensionless energy equation is

The performance parameters were calculated using the procedure shown in Figure 3. The number of nodes was 1000 × 1000 for the lubrication model

For an inclined surface as shown in Figure 4, the film thickness is continuous and does not require special treatment using equation (15). To assess the accuracy of the lubrication model for continuous film thickness, its calculated values are compared with the results obtained by Raimondi [13].

In the present study, the parameter values that are used for the lubricating oil are the same as those in reference [13], namely t 0 = 100 °F, η 0 = 8.16 × 10−6 lb s/in.2, ρ = 0.0312 lb/in.3, cv  = c ρ  = 4435 in./°F, where the parameter values are given in non-standard units for consistency with the quoted reference. The viscosity η = η 0e− β( t−t 0 ) is applied, and β = 0.02342 is obtained by curve fitting using the values of viscosity and temperature given in Table 1 in reference [13] (the tables and figures in the references are quoted in all capitals in order to distinguish them from this paper, the same below). The density is treated as being constant of 0.0312 lb/in.3 because it changes little within the temperature range used in reference [13]. The film thickness h and the dimensionless film thickness H are expressed as

and two parameters used in reference [13] are defined as

With the above parameter values, equations (1) and (16) are solved using the FDM for B/L = 1, with ΔT and p max BL/W (i.e. p max/P in Ref. [13]) calculated under various working conditions. The results calculated by Raimondi are taken directly from Table 2 in reference [13]. Herein, Table 1 gives the results obtained by the present approach and Raimondi, from which the errors in ΔT and p max BL/W are calculated using

Figure 5 compares the present and published results for 10−4Ωp = 10 psi. As can be seen, within the range of parameter values studied, the maximum error in ΔT (7.3%) occurs at h 1/h 2 = 4.0 and the maximum error in p max BL/W (3.3%) occurs at h 1/h 2 = 1.4. Meanwhile, the manner in which the errors vary with h 1/h 2 shows no obvious trend and instead can be considered as random. In general, the errors between the present method and that in reference [13] are very small in most cases.

Figure 6 compares the present and published results for h 1/h 2 = 2. As can be seen, within the range of parameter values studied, the maximum error in ΔT (7.7%) occurs at 10−4Ωp = 10 psi and the maximum error in p max BL/W (4.3%) occurs at 10−4Ωp = 30 psi. Meanwhile, the manner in which the errors vary with 10−4Ωp shows no obvious trend and instead can be considered as random. Combining the errors in Figures 5 and 6 the maximum error is only 7.7% within the range of parameter values studied. The two approaches give different results under the same conditions for the following main reasons. (1) The results differ slightly according to the meshing conditions. (2) The value β = 0.02342 is obtained by curve fitting using the values of viscosity and temperature in Table 1 in reference [13], the coefficient of determination of the curve fitting is 0.996, which is close to but not equal to 1. Therefore, the viscosity values used in the present study differ slightly from those in reference [13]. (3) The Density is treated herein as a constant, which is slightly different from the treatment in reference [13].

Results from Raimondi [13] and present approach.

Results from Dobrica and Fillon [21] and present approach.

For a stepped surface, take as an example a pocket bearing as studied by Dobrica and Fillon [21]. Figure 7 shows the physical model, for which the relevant parameter values are the same as those in reference [21], namely L = 0.08 m, B = 0.08 m, hP  = hI  = 20 µm, ρ = 860 kg/m3, Cρ = 2000 J/kg · K. The viscosity-thermal coefficient β = 0.0316 is calculated from the viscosity values at 40 and 100 °C in reference [21]. The length LP and the width BP of the pocket are varied between 12% and 87% of the entire pad length L and width B, respectively. Based on these parameter values, the pressure distribution, maximum temperature and load capacity are obtained using the present procedure and then compared with those obtained using the FVM in reference [21].

By comparison with published results, the modified lubrication model in the present study exhibits high calculation accuracy on both inclined and stepped surfaces. This effectively improves the accuracy of lubrication calculations using the FDM by ensuring the flow continuous for textured surface. The present study provides a necessary theoretical basis for combining the modified FDM with the multi-objective optimization of textured mechanical seals in future research.

This study has provided an equivalent thickness treatment to modify the existing thermo-hydrodynamic lubrication model. The accuracy of the modified lubrication model was assessed by comparing the film pressure distribution, temperature and load capacity calculated using the FDM and published results obtained using the FVM and FEM for models of inclined and stepped surfaces. Upon comparison, the results agreed very well, meaning that the lubrication model modified by the equivalent thickness treatment addresses well the issue of discontinuous film thickness when the FDM is applied. This work is important in that it improves the simulation accuracy of multi-objective optimization of textured mechanical seals.

This work was supported by the Talent Introduction Foundation of Jiangsu University of Technology (No. KYY19001) and the Natural Science Foundation of the Jiangsu Higher Education Institutions of China (No. 19KJB460001).

Results from Raimondi [13] and present approach.

Results from Dobrica and Fillon [21] and present approach.