Until now, several experimental tests and numerical studied are conducted to study of ship hull wakes by researchers [1–12]. In this regards, pressure distribution, open water characteristics and thrust fluctuation of conventional and highly skewed propellers under non-uniform wakes are studied numerically by Ghassemi [5]. Ji et al. [6] investigated the cavitating flow around a submerged propeller under a non-uniform wake, numerically. They also studied the excited pressure fluctuation around the propellers operating in a non-uniform wake and shown that the major source of the pressure fluctuations is the acceleration generated by the changes of the cavity volume [7]. Effects of wake scale on the pressure fluctuations factors is studied with a simulation procedure suggested by Berger et al. [8]. Greco et al. [9] conducted a numerical study to investigate of propeller thrust and torque, slipstream velocities, blade pressure distribution and pressure disturbance on marine propeller under free wake in an open water condition. Shin et al. [10] studied the unsteady cavitation on a tip-modified propeller under two types of ship wakes including model test measurement and bare hull RNAS simulations. Moreover, Martin et al. [11] studied maneuverability of submarines by considering the propeller forces and moments under the hull wake with coupled CFD/potential flow propeller solver. Similar works on the subject were also presented in Broglia et al. [12]. In order to investigate of unsteady forces on marine propellers under the non-uniform and non-stationary wake, Abbas et al. [13] conducted a numerical simulation by using hybrid URANS-LES model.

Recently, pressure distributions, limiting-streamlines and cavitation volumes of the E779A propeller in open water and in a cavitation tunnel behind wake generating plates is reported numerically by Vaz et al. [14]. They used eight different flow codes and CFD software for their study. Pereira et al. [15] conducted an experimental test to study the cavitating propeller operating in a non-uniform wake. They suggested quantitative correlations between the near pressure fields and the cavitation pattern. Moreover, in an experimental study, Ueno and Tsukada [16] estimated the fluctuating full-scale propeller torque and thrust under free-running model ship condition in waves and under non-uniform wakes. Sun et al. [17] calculated the propeller exciting force under the non-uniform wake of KCS ship in oblique flow by using hybrid method of RANS and volume of fluid model. Also, hydro-elastic analysis on marine propeller under the inflow wakes and the effects of shafts is studied numerically by Zou et al. [18].

For this purpose, the velocities from non-uniform wakes of Seiun-Maru ship (measured by Ukon et al. [19,20]) and INSEAN 7000 DWT Tanker (measured by Salvatore et al. [21,22]) are implemented. Figure 1 shows our considered two types of the real ship and propeller behind the ship. Then, variation of thrusts and torques coefficients under different number of blades, pitch ratio, and expanded area ratio (i.e. fifteen different propeller cases with 3–7 blades, pitch ratio and expanded area ratio varied from 0.2 to 1.4 and 0.2 to 1.1, respectively) are studied by using classical mathematical methods in one cycle and their Fourier coefficients with ten terms are presented.

During recent years, Ghassemi et al. worked on the different propulsor (poded propeller, ducted propeller, surface propeller and propeller with augmentation devices) numerical analysis by BEM and CFD [23–25], ship hull-propeller interaction [26], calculations of the sound pressure level of the marine propeller in low frequency [27], hydrodynamic characteristics of the ducted propeller and its different geometries effect [28] as well as the propeller efficiency enhancement of the blade's tip reformation [29]. Based on cited works, mathematical functions of the non-uniform wake flow entered to the propeller geometries is not well known. Therefore, in the current study, thrust and torque of the propeller with different geometries are evaluated.  A numerical code is prepared to read the input data like wake flow behind the ship and propeller geometries, then calculate the propeller thrust and torque fluctuations against one cycle rotation. Present study employed on two different wake flows (by two ships) and the results are presented and discussed.

The rest of this paper is organized as follows: Section 2 gives an outline of the mathematical formulation techniques to compute unsteady thrust, torque and hydrodynamics coefficients. Section 3 provides some details about non-uniform wake flow. Section 5 presents the results of computations of the thrust and torque fluctuations with different propeller geometries and the results are presented and discussed. This is followed by the conclusion remarks in Section 5.

In this section a short overview of formulas utilized to calculate of propeller thrust and torque coefficients for one blade and all blades are presented.

(1) where am, a', and bm, ⁡ b' are Fourier coefficients. In practice, only a limited set of harmonic components are used. In this paper m = 10 is considered for all the computations.

Also, n(r, θ) is the instantaneous revolution rate at the angle θ:

(2) where n, R = (D/2), and X = (r/R) are rotational speed (RPM), radious of propeller, and non-dimentional radial section, respectively. The advance coefficient for a blade at the angle θ is:

In the non-uniform wake flow, the thrsut and torque coefficients of the propeller are obtained using polynomial regression analysis as given below:

(4) where the Z, EAR and P/D are number of blade, expanded are ratio and pitch ratio, respectively. The values of n, Sn, tn, un and vn are regression coefficients [30,31].

These thrust and torque coefficients can be defined by Fourier transformation as follows: 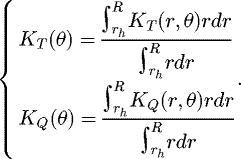 Using Simpson's rule, the integrals may be determined by following formula: 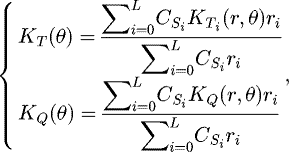 are number of ordinate and Simpson's multiplier, respectively.

The main goal of this paper is to find thrust and torque coefficients (KT(θ)andKQ(θ)) variations during one angular position (θ = 0 ∼ 360) at different propeller geometries under non-uniform wake flows.

The nominal inflow wake data of the studied propellers were obtained in two cases: (1) full-scale condition at the stern of the Seiun-Maru ship hull, which was carried out by Ukon et al. [19,20] at the National Maritime Research Center (NMRC), in Japan, and (2) the nom-uniform wake measurements of the INSEAN 7000 DWT Tanker measured by Salvatore et al. [21,22]. INSEAN 7000 DWT Tanker is the name of a model ship design developed by CNRINSEAN for the purpose of hydrodynamic studies on ship propulsion. The INSEAN 7000 DTW Tanker is a single-screw, bulbous bow ship designed for cruise speed at 14 knots. Velocimetry measurements to determine the hull nominal wake were performed at the large CTO towing tank by using a 5-hole Pitot-tube technique.

Non-uniform wake measurements of Seiun-Maru ship and INSEAN 7000 DTW tanker are done in ten radial sections. Contour and vector wake velocity distribution at propeller plane are presented in Figure 2. The measured wake flow contours indicate the axial speed of water and the arrows denote the transverse velocity field in front of the propeller in the full scale. Figure 3 shows the axial and tangential velocity component of wake flow in fractions of the ship speed at different radial sections in the propeller plane. Also, Table 1 shows Fourier coefficients of axial and tangential velocity distribution in fractions of the ship speed in the propeller plane at X = r/R = 0.7 based on equation (1). The Discrete Fourier Transform (DFT) interpolation of these velocities is presented in Figure 4.

Fourier coefficients of axial and tangential velocity distribution at r/R = 0.7.

Two wakes of the ships (namely Seiun-Maru and Insean Tanker) are selected to obtaing the propeller thrust and toruqe. Table 2 is given the main dimensions of those ships and their employed propeller. Figure 5 shows some examples of the studied propellers. In this study, instead of the original employed propeller, we used different B-series propeller in order to obtain thrust and torque coefficients variations and Fourier mathemtical formulas under non-uniform operating conditions.

Seiun-Maru training ship has design speed 17.5 knots with propeller diameter 3.6 m while INSEAN tanker has 14 knots with propeller diameter 3.85 m. Propeller rotating speed is selected 120 RPM. To obtain an understanding of the effect of various propeller geometries parameters upon thrust and torque coefficient, variations of these parameters with Z, P/D and EAR are investigated. Also, the Fourier coefficients with ten terms based on equation (5) of the B-series propeller are presented. All instantaneous revolution rate, advance ratio, thrust and torque coefficients are calculated through equations (2–4).

Main dimensions of the ships and their employed propeller.

Wake field of a ship strongly depend on the ship hull geometry. A change in wake distribution changes the angle of attack and the cavitation number of the propeller blades. A wide ship creates bigger waves than a thin ship as shown by Noblesse et al. [32]. Wake of the Seiun-Maru hull is something U-shaped hull and generally its fluctuations are bigger than 7000 DWT Tanker with V_shaped hull.

In this research, the variations of the thrust and torque coefficient fluctuations of the B-series propeller under non-uniform wake behind the Seiun-Maru ship and INSEAN 7000 DWT Tanker hulls were investigated. Also the effects of propeller parameters including number of blades, pitch ratio and expanded area ratio on the thrust and torque coefficients were considered. It can be used the results of this paper for the practical purposes such as propeller pre-design with the sufficient accuracy and reliability. The main results of this study are as follows

Fourier coefficients of axial and tangential velocity distribution at r/R = 0.7.

Main dimensions of the ships and their employed propeller.

In the text
Table 4

In the text
Table 5