In the multi-station processing of automobile alternator frame, the picking and placing technology of the frame is a combination of mechanics, electronics and intelligent control technology. It is the key technology for assembling robots on the automated production line, and it is also the supportive technology for gripbing, handling, assembly, and palletizing of workpiece. However, the traditional assembly robot must be taught point by point to complete the “pick-place” action. The picking point, the placing point and the locus of the pick-place are all determined beforehand, so the automation production line must be highly structured. Moreover, traditional assembly robots require high precision of assembly environment and machine itself, have low assembly efficiency, lack of perception and adaptive control ability, and are difficult to complete complex assembly in changing environment. Especially, the workpieces on conveyor belt are moving and scattered, and the positions and postures of picking and placing points are generally not fixed, which greatly limits the application of traditional robots in modern flexible production lines. Therefore, using force sensing and human-like intelligent control technology, research on high-perception, high efficiency, high adaptability and high-precision assembly robot picking and placing technology has become one of the key technologies for processing and assembly of automobile alternator frame. In force sensing, the process of the robot gripbing the frame to the corresponding fixture can be regarded as the assembly of dual peg-in-hole. Therefore, it is necessary to analyze the characteristics of the process and simplify the model, and then to analyze the contact state and contact force. In the research of dual peg-in-hole assembly, domestic and foreign scholars have carried out certain researches. Based on the enumeration method, Korntham et al. analyzed jamming conditions in detail for dual peg-in-hole assembly [1]. However, this enumeration method is no longer applicable for multi peg-in-hole assembly with uncertain number. ARAI described the two-dimensional dual peg-in-hole assembly error model and analyzed the search strategy [2]. Sturges and Laowattana analyzed the conditions for inserting three-dimensional rectangular peg [3,4]. Fei et al. analyzed the three-dimensional dual peg-in-hole with the space screw theory and obtained the corresponding jamming diagrams [5]. However, there is no detailed analysis of the specific assembly strategy. Zhang et al. analyzed the assembly of flexible dual peg-in-hole and put forward the corresponding force control strategy, and made a series of analysis and research on rigid dual peg-in-hole [6,7]. However, as for the assembly strategy of the rigid dual peg-in-hole, they only use traditional impedance control to complete the assembly, but do not use jamming diagrams to guide the assembly, so that the adaptability is not high.

To the best of our knowledge, there is no research on the use of jamming diagrams to guide the assembly of the rigid dual peg-in-hole. On the basis of the former researches, this paper applies the related theory to the assembly of automobile alternator frame and fixture, abstracts and simplifies the assembly process model, and then makes corresponding analysis and research, finally, the corresponding assembly strategy is obtained.

During the processing of the automobile alternator frame, after the frame blank is precision-cast-molded, it is processed through a series of rough processing such as removal handle, grinding, punching and trimming, and then the formed blanks are passed through the production line for turning, milling end faces, drilling and tapping of threaded holes and final cleaning operations. The entire production line only needs to put the rough-finished frame into the feeding conveying equipment, and then through the automatic control system, the robot grips the frame to successively enter the turning, milling, drilling and tapping, cleaning station for processing. After the processing is completed, the frame enters the detection module through the discharge conveyor belt for product qualification detection [8].

In the milling, drilling and tapping station, the assembly is carried out in the vertical direction. As shown in Figure 1, the experimental system is composed of the end of the system (1), the force acquisition system (2), the display (3), and the YASKAWA robot body system (4).

After the grip part grips the alternator frame into the corresponding fixture, and the fixture fixes the frame, the machining center performs milling, drilling and tapping. In this assembly process, the position of the alternator frame is usually not fixed. If there is a positional deviation between the frame and the fixture, the frame will be stuck outside the fixture, and in severe cases, the gripping part will be damaged, so it is necessary to model the contact force for this process, which will be simplified and modeled below.

Three-dimensional contact assembly force and moment relationship of the frame.

A two-dimensional simplified diagram of the one-point contact state L-1 is shown in Figure 7a. The range of the contact force acting on the left locating hole of the frame is as shown in the range of the solid arrow in Figure 8, that is, the left half of the left locating hole. Let one of them be f1, and the angle between it and the positive X axis is α1, the friction is μf1, the direction is vertical to the paper facing outward, and the assembly forces and moments are Fx, Fy, Fz, Mx, My, and Mz respectively, that is, the forces and moments measured by the 6-DOF force/moment sensor. According to the static equilibrium equation, we can get: 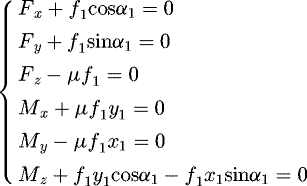 From (1), the following relationship between force and moment can be obtained:

The two-dimensional simplified diagram of the two-point contact state L-5 is shown in Figure 7b. The contact force acting on the left locating hole of the frame is f1 and f2, of which the description of f1 is the same as above, and the range of the action points of f2 is shown by the dotted arrow of Figure 9, that is, the right half of the left locating hole. Let one of them be f2, and the angle between it and the positive direction of the X axis is α2. The friction is μf1 and μf2, the direction is vertical to the paper facing outward, and the assembly forces and moments are Fx, Fy, Fz, Mx, My and Mz respectively, as shown in Figure 9. According to the static equilibrium equation, we can get:

(6)(5) and (6) respectively show the corresponding linear relationship. For equation (5), when

, the equation is reduced to equation (2), that is,

Due to the incorrect ratio between the assembly force and the assembly moment acting on the frame, the frame will be stuck outside the fixture. Through the relationship between

, three kinds of jamming diagrams can be made, as shown in Figure 10, in which Figure 10b and c are derived since sinαi has a sign of positive and negative according to the range of value of αi.

represents the linear relationship between

represents the linear relationship between

In Figure 11, the vertical line describes the line contact state, and the combination of Fx, Fz, and My falling on the quadrilateral indicates the movement in the equilibrium state; the combination outside the quadrilateral indicates that the frame is stuck outside the locating pin, whether one-point contact or two-point contact; inside, the frame can be properly loaded into the locating pin and ensure successful assembly.

There are three stages in the assembly process of automobile alternator frame: free stage, contact stage and mated stage, as shown in Figure 12, where P1 and P2 represent the lowest and highest points of the two locating holes on frame respectively. In actual assembly, due to the limitation of assembly conditions and geometric conditions of automobile alternator frame and fixture, the most possible jamming diagram can be selected to guide the assembly.

The experimental platform is shown in Figures 1 and 2. A YASKAWA robot and a 6-DOF force/moment sensor are used in the experiment. In this experiment, the pneumatic hand grasp at the end of the robot can grab the automobile alternator frame, while the fixture is fixed on the platform of the drilling and milling machining center. The parameters of the assembly of the frame are shown in Table 3, and the meanings of the parameters in Table 3 are shown in Figure 5.

Assembly paramaters of the frame.

After translating and rotating, the position error of automobile alternator frame decreases, the slope of coordinate curve increases to 0.139 mm/step (see Fig. 15), and Fz decreases to 9.007 N (see Fig. 16), which means that the contact resistances between the frame and the fixture decrease, and the frame begins to mate with the fixture.

Then, in the contact stage and the mated stage of the assembly process of the automobile alternator frame, the assembly forces and moments of some states are selected according to a certain moving sequence number interval. From the relationship between these forces and moments and the selected jamming diagram, the experimental jamming diagram in the assembly process can be drawn as shown in Figure 17. It can be seen that 70.59% of the points fall inside the quadrilateral, which means that the overall assembly process is relatively smooth, but there are also 29.41% of the points falling outside the quadrilateral. At this time, the alternator frame is in a jamming state. Then the jamming factor Jf would adjust to control the movement of the alternator frame to successfully complete the assembly.

The authors gratefully acknowledge the financial support of the ningbo industrial major project (No. 2017B10027).

Three-dimensional contact assembly force and moment relationship of the frame.

Assembly paramaters of the frame.