Thermal characterization of a plate heated by a multi-jet system

This study is an experimental and numerical analysis of the influence from changes in the conditions of inputs temperature and velocity on the behavior thermal and dynamic of a multi-jet swirling system impacting a flat plate. The experimental device comprising three diffusers arranged in line, of diameter D aloof 2D between the axes of their centers, impinging the plate perpendicularly at an impact height H = 6D. The swirl is obtained by a generator (swirl) of composed 12 fins arranged at 60° relative to the vertical placed just at the exit of the diffuser. By imposing the temperature and velocity for three input conditions with three studied configurations. The paper deals with find the configuration that optimizes the best thermal homogenization. The results show that the configuration having an equilibrated inlet temperature (T, T, T) is derived from a good temperature distribution on the baffle wall and a better thermal transfer from the plate. The system was numerically simulated by the fluent code by using the turbulence model (k–ε). This last has yielded results accorded to those experimental results.

Several industrial techniques engender impinging jets in the areas of industry. They are commonly used for cooling process, heating or drying, such as drying of paper and textiles, electronics cooling, cooling of gas turbine blades, cooling the glass sheets, cooling of combustion chambers of new generation and processing of the polymers, in the aim of optimizing heat transfer between a fluid and a structure. Several experimental and numerical works have shown the possibility to improve the heat transfer by the implementation of the impact of jets. Despite the number of jobs on the impacting jets, there are very few systematic studies of quantization the mixing layer. Still we can cite the work of Ding et al. [1] in jet impacting small distance (y/ d < 5). Their analysis focuses particularly on the wall jet region after impact. These jet types are notably used for heat exchange. In fact, the optimal distance to cool a surface is at the place where the intensity of the axial turbulence reaches a maximum. This maximum is localized to h/d comprised between 6 and 8. This explains that the impacting jets are usually studied for impact distance h smaller than 10 diameters (Fig. 1).

The realized experimental device consists of a frame of the cubic form of metal with dimensions (1.20 m × 1, 20 × 2, 0 m); having at its upper part the devices for blowing hot air (hair dryer), directed from the top down to the bottom and different types of diffusers (1) depending on the configuration studied part. This device allows to scan the maximum space provided by a particular arrangement of the rods supporting the thermal sensors (2); the temperature field is explored with a portable anemometer unit VELOCICALC more (4). The probe rods are easily guided vertically and horizontally by supports to scan the maximum space, a horizontal plate (3) material Formica. The ambient temperature Ta is obtained by a digital thermometer (5) from the measurements of temperature T in different parts of the jet. The temperature at the origin blowing Tmax is raised for each type and configuration of the jet (Fig. 2).

3 The number of swirl

The swirl number of adding an azimuthally component to the velocity field of the result is a flow, the swirl makes coherent structure, strongly held in the case of the free jet lower suppressing vortex-pairing (pairing of vortices) and by an increase of the turbulence. It was observed that as of a certain intensity of the onset of the swirl zone in the main flow recirculation. The vortex generated by the swirl effect to make the anisotropic turbulence, it has an inhibitory effect on the transfer of energy from large organizations to small structures. The swirl is characterized by a dimensionless number that defines a measure of the ratio between the angular momentum of the axial flow G θ and axial flow of the axial momentum G X (axial thrust) Gupta et al. [4]. 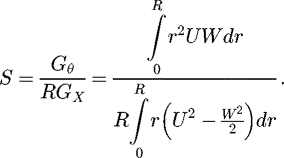 (1) The swirl number can be evaluated at any position of the jet because the two quantities are calculated. Swirling helps promote and improve the process of mixing and transfer, as well as the jet has the advantage of quickly flourish in free jets.

Another empirical formula is used for calculating the number of swirl that the swirl number defined according to the geometric parameters of the swirl generator. This number S can be written as Hung et al. [5] as follows:

Such that: α is the angle of the fins built swirl generator, Rh the radius of the vane diffuser support, and Rn is the radius of diffuser.

The experimental setup was placed in a local having the following dimensions: length = 4 m, width = 3.5 m and height = 3 m. There must be a free flow of the isolation and testing, the initial temperature at the blowing diffuser was 90 °C for each jet.

The values of the initial temperature Ti and the flow value of the ambient temperature Ta measured by the temperature sensors of precision (1/100). They are raised until the temperature stabilizes. The ten minute delay was sufficient to achieve this stabilization, after measuring, the temperatures for a given configuration, and the pairs of blowing is stopped and the movement of the rods proceeds door sensors to other measurement point.

The reduced temperature (Tr) of measurement is obtained by reference to the maximum average temperature at the outlet of the blowing opening and at room temperature:

Reduced dimensionless axial velocity is obtained with respect to the maximum velocity at the outlet of the blowing port.

Similarly, the azimuthal and axial distances are given by reference to the diameter of the blowing diffuser in dimensionless form y/D.

7 Heat transfer from the impinging jets

(6)where h is the local convective heat transfer coefficient [W m−2 K−1], λ the thermal conductivity of air, taken at the reference temperature [W m−1 K−1], and L is the length of the plate [m].

According to Murray et al. [8] for a turbulent flow, the Nusselt number is calculated by an empirical formula:

(7) Re is the Reynolds number. It is defined by:

(8) ρ is the density of air, U the average velocity [m s−1], and Pr is the Prandtl number is a dimensionless number; it represents the ratio of momentum diffusivity and thermal diffusivity

8 The different types of diffusers

This hypothesis, known as the “Boussinesq” hypothesis, provides the following expression for the Reynolds stress tensor, Launder et al. [9].

(10) k is the turbulent kinetic energy defined by:

The turbulent viscosity is obtained by assuming that it is proportional to the product of the scale of the turbulent velocity and the scale of length. In the model (k–ε), these scales of velocities and lengths are obtained from two parameters, the kinetic energy k and the rate of dissipation ɛ. Thus can be expressed by the following relation:

The values of k are required in the equation are obtained by solving the following conservation equation: 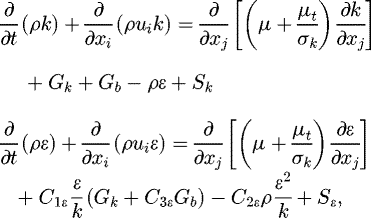 For numerical simulation of this type of flow, mesh generation was carried out with tetrahedral meshes comprising 1 201 672 cells. Calculations were tested on different meshes up to 1 547 214 cells for the control of the solution, in order to seek the limit of the independence of the solution with respect to the fineness of the mesh [10], it was found that the solution has not been changed. We can therefore conclude that the mesh is acceptable and the solution is independent of the mesh.

10.1 Influence of entry conditions on the temperature of the plate

Figure 4 shows the temperature profiles for the resorts near the impact (Z = 3.5D). These curves clearly show the influence of inlet temperatures conditions of diffusers (T/2, T, T/2), (T, T/2, T) and (T, T, T), on the reduced temperature wall.

It is noticed that the promoter which has temperatures equilibrated at the inlet (T, T, T) gives a more uniform temperature distribution on the surface of the plate relative to those of other configurations. This homogenization of the temperature drifts of a better heat transfer from the plaque.

10.2 On the reduced average velocity Ur

It is found that the speed is more balanced to the input; the greater will be velocity stability and becomes an almost uniform over the entire surface of the plate. We conclude that the velocity stabilization is obtained for multiple jets impinging transitional (H = 6D), having uniform entry flow velocity's of.

Figure 6 shows the superposition of three numerical curves of the variation of Nusselt number Nu, depending on the ratio of the radial distance dimensionless y/D for an impact height H = 4D, setting a station near the impact wall Z = 3.5D.

The profiles are compared for three respective input conditions of temperature (T, T, T), (T, T/2, T), (T/2, T, T/2). Is noticed that the configuration having a temperature distribution (T, T, T) gives a number of good Nusselt moderate compared than that of other configurations of input temperatures. So, the more we balance the temperature and velocity at the inlet greater the number Nusselt stabilizes and becomes a moderated to impact wall, which better promotes convective transfer of the plate.

10.4 On the temperature field

11 Validation of the results

The comparison of numerical and experimental results is evidenced in Figure 8a–c, relating to the reduced temperature Tr, the reduced velocity Ur and Nusselt number Nu in the plan (y, z), respectively.

The numerical results of the model with two transport equations (k–ε) used to simulate the present case are in good agreement with experimental results. Notwithstanding some shortcomings of this model (k–ε), he gave acceptable results qualitatively. It is nevertheless a tool of simulation relatively simple to use and inexpensive.

An experimental study and a numerical simulation of a multiple swirling jet system impinging a plane plate have summers realized.

By characterizing the behavior of the thermal and dynamic field of flow configurations studied, we note that:

This mixing ratio may be influenced by other para meters, such as the swirl direction of the central jet, the inclination of the axes of side jets, the variation of the center distance, the geometry diffusers, etc. These will be examined in a forthcoming study.

L : Length of the plate

ε : The rate of dissipation of kinetic energy, m2 s−2

Cite this article as: A. Zerrout, A. Khelil, L. Loukarfi, Thermal characterization of a plate heated by a multi-jet system, Mechanics & Industry 19, 503 (2018)