This paper presented a new control strategy for active suspension of nonlinear quarter-vehicle model. An active suspension controller designed for using sliding mode control with noise filtering. The Kalman filter (KF) predicted the state response of the nonlinear one-quarter automobile model, and the estimated values used for the design of the active control force. Finally, the shock absorption performance compared with the LQR controller and the passive suspension. The simulation results showed that the control method significantly improve the ride performance and safety of the vehicle.

Various control methods have proposed to achieve active control of the suspension. Sun et al [3] discussed the problem of H∞ control for vehicle active suspension systems in the finite frequency domain. The results showed that the ride comfort had improved, and the time-domain constraints guaranteed by linear matrix inequality optimization. Jamil et al [4] studied the optimal problem of actuator output force in suspension, combining optimal control with intelligent control technology. The suspension system has a high damping characteristic of LQR control. The actuator produces moderate peak and stable amplitude control force to improve the ride quality and handle stability of to automobile and comfort of passengers. Wang et al [5] used the vehicle body acceleration as to the control target and optimized the control rules with the improved Fuzzy-PID control strategy to speed up the optimization. The experimental results have achieved good global optimization performance. Their test results showed that it can suppress the vertical acceleration of the car body significantly and improves the driving comfort. Based on the multi-performance target optimization algorithm, Crews et al [6] considered the performance objectives of ride comfort and damping power dissipation and used the multi-objective genetic algorithm (MOGA) to determine the optimal performance of the controller. The results show that the two performance goals improved. By those control methods, we know that researchers have considered different optimization goals to achieve the requirements of active control. However, they all assume the vehicle model as a linear structure.

The nonlinear problem of the spring rigidity and damping of the suspension were not considered. Actually, the vehicle suspension is a nonlinear system, operating conditions are also changing, and there is always noise interference during the operation of the vehicle and the signal acquisition of the sensor [7]. The measurement of the state variable of the suspension is still incomplete in the actual procedure. These have limitations on the design of the controller. Therefore, if we only consider the linear vehicle model when designing the controller, the control effect is not satisfactory in practical engineering applications.

This paper uses the variable structure control method to solve the nonlinear problem of the system. Because the sliding mode control structure is easy to design, and if the conditions met, the system is entirely adaptive to the system interference and parameter perturbation, and the system has strong robustness [8–10]. The state of the system is required to design the sliding mode controller, and the acquired state signal uses the Kalman filter to remove the noise to get the actual value. The proportional integral PI method is used to the sliding surface, which provides greater freedom and reduces stability error. The simulation results demonstrate the effectiveness and robust of the proposed active suspension control method.

In the previous classic suspension model, springs and damping were often seem as linear components, simplifying the study. However, this does not adequately describe the real car suspension; the effect is limited when applied to the actual suspension. This paper considers the inherent nonlinearity and parameter uncertainty of the vehicle suspension system [11].

The design of the filter and control mechanism requires a dynamic equation for the suspension. This paper applies the classic quarter suspension model shown in Figure 1, where ms represents the mass of the car body and mu represents the mass of the tire system. The suspension and shock absorbers that connect the body, and the tire have stiffness and damping coefficients of ks and bs, while the rubber tires are approximated as elastic members with the stiffness of Kt. In the model, zs represents the displacement of the vehicle body, zu is the displacement of the tire, and zr is the input excitation of the road surface. The variable force u represents the force at which the controller generates active control.

According to Newton's second law, the force equations of the model are

Where the damping force and spring force of the suspension in the formula take into account its nonlinear characteristics, and the simplified tire force, respectively, are as follows 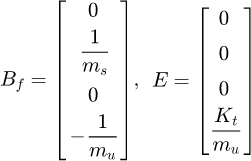 Where d(x, t) contains nonlinear and uncertain structures in the suspension system.

Because of the nonlinearity of the vehicle model and the disturbance of the road, the riding comfort and road handing of the vehicle depends on the performance of the suspension system. This paper applies the sliding mode control method to design the active control force. Firstly, the sliding surface needs to be designed to ensure that the system motion track slides along the specified line to the equilibrium point. In our paper, we use the proportional integral sliding surface expression as follows:

Where C∊ℝ m×n and E∊ℝ n×n are constant matrices, to get the system into the sliding mode, you must ensure that s = 0 is established. At the same time, the equivalent control force ueq (t) is obtained from

If there is a matrix C such that CB is a non-singular matrix, the equivalent control force ueq is

Substituting Equation (6) into the system (3), the feedback closed-loop system dynamics equation is as follows

, the system (7) is bounded and stable on the sliding surface s=0.

Proof. In order to simplify the certification process, we let

Then Equation (7) is simplified to

We choose the following Lyapunov function related to the vector x(t).

Deriving V(t) along the trajectory of x(t), gives

Where Q is an arbitrary positive definite symmetric matrix, then P is the unique solution corresponding to equation

is satisfied for all x(t) satisfying

In this paper, the constant reaching law is used, and the saturation function is used to weaken the chattering. Finally, the control law of the uncertain system is obtained.

The sensor measures the state quantity of the suspension. Nevertheless, due to the actual constraints, only certain state variables can be tested, and there is noise in the process of signal acquisition. Therefore, the Kalman filter is used to filter out the noises, and all state variables are estimated [13]. Finally, the controller is designed based on state estimates.

In order to meet the design conditions of the Kalman filter, we can rewrite the system Equation (3) as:

. Af (x) is a time-varying matrix, which can vary according to changes in the state of the system. In general, the relative displacement zs -zu and the relative speed

between the body and the tire can be measured by sensors. Converting a continuous state equation to a discrete state equation by a zero-order keeper is shown below.

. Where k is the kth sample data, Φ(x(k−1),k−1), Γu and Γw represent the system parameter matrix, control input matrix and external interference matrix of the discrete state equation, respectively. H is the output matrix, and w and v represent the process noise vector in the suspension operation and the noise vector in the sensor measurement, respectively. Then we can obtain the Kalman filter as follows:

are the estimated state and output vectors, respectively.

obtained by the filtering, the actual output control force u is calculated as follows

Due to the limited space between the car body and the tire, its size must not exceed the maximum value xr . This article uses relative suspension deflection (RSD) to evaluate whether the suspension interferes with the body, denoted by ζ, is defined as

To ensure that the wheels do not leave the ground, use the relative tire force (RTF) to show whether the dynamic load of the tire exceeds the static tire load, denoted by φ, is defined as

Both RSD and RTF values must be guaranteed to be less than 1, so that the car can travel smoothly and safely. The vertical acceleration

of the vehicle measures the comfort of the ride.

For reflecting the performance of the control method proposed in this paper, we compare it with the linear quadratic regulator (LQR) control approach and passive suspension. Vehicle model parameters are shown in Table 1, and the initial value of the state vector x is set to x(0) =[0000] T.

The road input disturbance is given by

The parameters of the LQR controller are as follows: the objective performance functions considered in this article include

To verify the performance of the proposed PISMC control method, the LQR control strategy and passive suspension are used as reference objects. The results are shown in Table 3. Figure 3 is responses of suspension displacement. As can be seen that PISMC can more effectively restrain the displacement of the sprung mass. The acceleration of sprung mass

This paper proposes sliding mode active control based on signal filtering and considers the nonlinearity of the suspension system and the influence of external uncertain disturbances. The PISMC control strategy was adopted for improve the robustness of the system to parameter changes and external disturbances. Besides, to achieve better control effect, more system state variables of the system needed for the control force. Due to practical engineering constraints, the sensor can only collect a part of the state signal, and the suspension system is running with a lot of noise in the acquisition signal engineering. In order to avoid adverse effects on the control system, the state of the suspension estimated by a Kalman filter to meet the design requirements.

The results show that the filtered estimate is consistent with the real value, enabling the controller to perform accurate control. In terms of control effect, compared with the performance of LQR and passive suspension, PIMSC has dramatically reduced the displacement and acceleration of the vehicle body, which can significantly improve the ride comfort and at the same time.

The authors declare no conflict of interest.