Abstract. The anti-missile interception technique of unpowered phase is of much importance in the military field, which depends on the prediction of the missile trajectory and the establishment of the missile model. With rapid development of data science field and large amounts of available data observed, there are more and more powerful data-driven methods proposed recently in discovering governing equations of complex systems. In this work, we introduce an anti-missile interception technique via a data-driven method based on Koopman operator theory. More specifically, we describe the dynamical model of the missile established by classical mechanics to generate the trajectorial data. Then we perform the data-driven method based on Koopman operator to identify the governing equations for the position and velocity of the missile. Numerical experiments show that the trajectories of the learned model agree well with the ones of the true model. The effectiveness and accuracy of this technique suggest that it will be realized in practical applications of anti-missile interception.

This is an Open Access article distributed under the terms of the Creative Commons Attribution License (https://creativecommons.org/licenses/by/4.0), which permits unrestricted use, distribution, and reproduction in any medium, provided the original work is properly cited.

The traditional missile modeling methods mainly depend on its dynamical analysis via classical mechanics [2,3]. With all sorts of forces and fluctuations emerging in practical case, it is sometimes difficult to take all these factors into consideration to establish a sufficiently accurate model. Fortunately, there are more and more available observable, experimental or simulated data in the missile system with the rapid development of the scientific tools and simulation capabilities. Consequently, how to infer the governing equations of the missile from data is of great significance in developing anti-missile interception technique.

With new progresses achieved in data science field recently, many data-driven methods are proposed to extract dynamical models from data. For example, the Koopman operator theory can be used to identify the deterministic and stochastic differential equations from time-series data [4-6]. Some researchers designed the Sparse Identification of Nonlinear Dynamics method to discover the deterministic ordinary [7,8] or partial [9-11] differential equations from data. Boninsegna et al. [12] generalized this approach to infer Itô stochastic differential equations based on Kramers-Moyal formulas from data. Then Li and Duan [13,14] made further investigation to propose nonlocal Kramers-Moyal formulas and accordingly devised a novel data-driven method to extract stochastic dynamical systems with (Gaussian) Brownian motion and (non-Gaussian) Levy motion from sample path data. Additionally, there are also some data-driven methods based on neural networks to learn dynamical models from time-series data [15-18].

In this research, we aim to realize the anti-missile interception technique via a data-driven method based on Koopman operator theory. In order to demonstrate the efficacy of this framework, we use an existing dynamical model of the missile established by classical mechanics to generate data and take it as ground truth to examine our data-driven model.

This work is arranged as follows. In Section 2, we briefly describe the model of the missile established by classical mechanics and assign it as ground truth for subsequent learned model. In Section 3, we introduce a data-driven method based on Koopman operator theory to identify the dynamical system from trajectorial data. Then the numerical algorithm is performed in this missile model to show its effectiveness and accuracy in anti-missile interception technique in Section 4. Finally, the conclusions are presented in Section 5.

For the sake of simplification, we make the following assumptions in the missile modeling. First, assume that the missile moves in the vertical plane, and the velocity vector and all forces always lie in this plane. Then consider the missile as a rigid body without elastic deformation. We also ignore the influence of the earth’s rotation and the weather. Assume that the missile flies without control and autorotation.

Under these assumptions, the equations of the missile motion can be derived via Newton’s second law 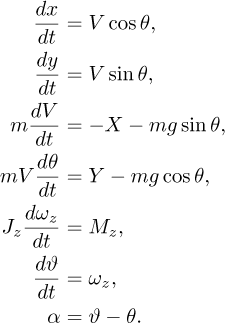 in equations (2) and (3) depend on the Mach number of the missile, which are shown in Table 1. The Mach number is defined as the ratio between the speed and the sound velocity

In the practical situation, we can only observe the position x and y of the missile by the radar when the missile is flying with a high speed. The velocity vector V and θ can be computed via the difference of the position data. Therefore, how to predict the moving trajectory of the missile based on the initial value of x, y, V, θ (or x3, x4) is a key problem in the anti-missile interception technique.

Structure parameters of the missile body.

Note that in order to predict the trajectory of the missile, we need to extract the dynamical system of the missile that can best approximate equation (4) from data. In this section, we use an effective data-driven method based on Koopman operator to achieve this goal [4-6].

Consider a dynamical system with the form of ordinary differential equation

where the phase space of the state vector x is ℝn and the vector field b : ℝn → ℝn. The associated Koopman semigroup of operators Kt is defined as

where f : ℝn → ℝ is a real-valued measurable function, indicating the observation of the system. The flow map Φt(x) is a solution of the system (5) starting from the initial point x(0) = x, in the sense that Φt(x) = x(t). The infinitesimal generator ℒ of this Koopman semigroup is defined as the derivative of Kt at t = 0,

which is given by

The extended dynamic mode decomposition is an effective method to numerically approximate the Koopman operator by a matrix [4-6]. We briefly review this method in this subsection. Then the vector field of the dynamical system can be identified by the approximate Koopman operator.

Assume that there exists a pair of data sets for the solution process x(t) of equation (5) containing M elements, respectively,

where each yi is the image point of xi after a small evolution time h for i = 1, 2,…, M, i.e., yi = Φh(xi). In other words, the equation (5) is integrated by numerical integral method such as Runge-Kutta method from initial point xi to get yi in time h. It is also need to choose a dictionary of observable functions Ψ(x) = [ψ1(x), ψ2(x), …, ψk(x)] to approximate the vector field. The results will be better if we seek more rich type of the observable functions, while the amount of work is immense and polynomial functions are sufficiently accurate for most cases. Thus we select polynomial functions as the dictionary in this research.

Assume that a function f can be written as f = ΨB, where B is a weight vector. Then

Via minimizing the residual term r(x), we obtain 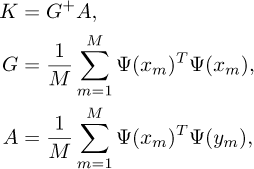 Therefore, the dynamical system (5) is identified from the trajectorial data. Via deleting the coefficients below a small pre-defined threshold parameter λ, we can also reduce the number of observable functions by sparse learning method to avoid overfitting [7,12,13]. The magnitude of λ is usually chosen as about 0.1–10% of the largest coeffcient in equation (13). The complete algorithm for identifying the vector field from data is concluded in Table 3.

The algorithm for identifying the vector field from data.

In this section, we employ the data-driven method described in Section 3 to discover the dynamical system from simulated data. Then we can integrate the learned model to obtain its trajectory and compare it with the one integrated by equation (4) in Section 2 to show the effectiveness of the anti-missile interception technique.

Note that the data of x5 and x6 in equation (4) are hard to be measured by the radar since they represent the attitude of the missile. Additionally, the exact governing equations for x1 and x2 in equation (4) are already known such that we just need to extract the dynamical model in the following form

The components b3 and b4 do not depend on x1 since the horizontal position of the missile does not affect its velocity.

. Then the Euler scheme is used to integrate equation (4) to get the data set Y with the time step h = 0.001. The dictionary of observable functions is selected as polynomial functions with the order up to 3, i.e.,

Thus the dynamical model of the missile as the form (14) is identified.

The learned model needs to be verified by comparing its trajectory with the one in Section 2. We choose the time interval length T = 35s and initial point (0, 0.96, 0.6960, 0.1, 0.001, 0.00062). The initial condition of our learned model just needs the first four components of this point. Then the fourth-order Runge-Kutta method is used to integrate equations (4) and (14) to get their solution paths, respectively, as shown in Figure 1. It is seen that the position and velocity of the learned model are consistent with the ones of the true model.

In fact, there are many random fluctuations such as wind and rain that affect the motion of the missile during its flight process. Therefore, it is desirable to examine the robustness of the algorithm with existing noise. The noise intensity is usually weak and we choose it as about 5%. The concrete operation is to add 0.01Bt in the right hand side of equation (4) when we generate trajectorial data, where Bt is a standard Brownian motion.

The paths integrated by the learned and true model are compared in Figure 2. It is seen that the results also agree well except more data information, which implies that the algorithm is very robust against environmental noise. Since the trajectory (x1(t),x2(t)) of the missile is accurately predicted, then the anti-missile interception technique can be realized by launching an interceptor to destroy it.

In this work, we propose an anti-missile interception technique in unpowered phase of the missile via a data-driven method based on the Koopman operator theory. In particular, we first introduce the dynamical model of the missile established by classical mechanics to generate the trajectorial data and take this model as the ground truth to test the effectiveness of our data-driven modeling. Then the Koopman operator theory and associated data-driven method are described for identification of the vector field. Numerical experiments are performed to discover the governing equations for the position and velocity of the missile. Results show that the trajectories integrated by the learned and true model agree well, which implies that the missile’s motion can be predicted well and thus it can be intercepted.

For the sake of simplification, the data in this research are generated by the simulation paths of a known model. Practically, we can measure and record the position and velocity of the missile and employ these real measurement data to discover the dynamical systems of the missile. This will lead to more accurate learned missile model and improve the ability of the anti-missile interception technique.

The authors declare that they have no conflict of interest.

The data that support the findings of this study are openly available in GitHub https://github.com/liyangnuaa/On-the-anti-missile-interception-technique.

This research was supported by Six talent peaks project in Jiangsu Province No. JXQC-002.

Cite this article as: Y. Huang, Y. Li, On the anti-missile interception technique of unpowered phase based on data-driven theory, Mechanics & Industry 23, 26 (2022)

Structure parameters of the missile body.

The algorithm for identifying the vector field from data.